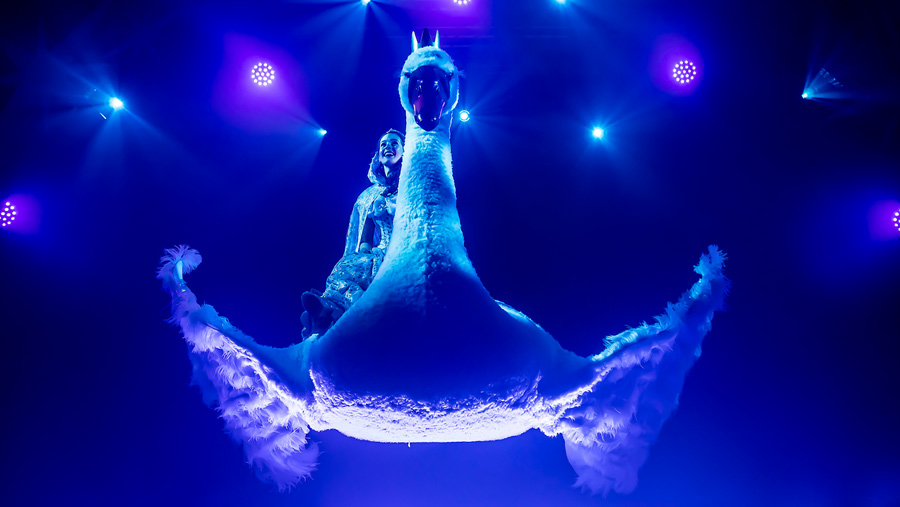 To design, create and manufacture a flying swan with moving wings, neck, mouth and eye lids on a manually controlled 5 meter boom.

Weighing less than 80 kilos at completion, the swan consisted of a fibreglass and polystyrene sculpted head and body. To achieve the detail on the swans head a clay head was sculpted and a rubber two part silicone mould.

Creative fabrications was commissioned to make a mechanical swan with moving body parts, flying rig and boom. To achieve this a team of 5 worked over 3 months to create what became known as the magnificent ‘Ron the Swan’.

The main body was carved in polystyrene covered in a less toxic resin and then upholstered in faux white fur. An LED light up base to the swan was installed creating a twinkling magical lighting effect.

The mechanics of the wings, neck, mouth and eyelashes are controlled by cable craft motion controls normally used in aeronautic design.
The project was designed, manufactured and project managed by Clare Grotefeld of Creative fabrications.

The Swan was the magical moment in the pantomime when Cinderella is whisked off to attend the ball.

Creative Fabrications would love to hear from you!
Give us a call to discuss your requirements or get a quote....

This website uses cookies to improve your experience while you navigate through the website. Out of these, the cookies that are categorized as necessary are stored on your browser as they are essential for the working of basic functionalities of the website. We also use third-party cookies that help us analyze and understand how you use this website. These cookies will be stored in your browser only with your consent. You also have the option to opt-out of these cookies. But opting out of some of these cookies may affect your browsing experience.
Necessary Always Enabled
Necessary cookies are absolutely essential for the website to function properly. This category only includes cookies that ensures basic functionalities and security features of the website. These cookies do not store any personal information.
Non-necessary
Any cookies that may not be particularly necessary for the website to function and is used specifically to collect user personal data via analytics, ads, other embedded contents are termed as non-necessary cookies. It is mandatory to procure user consent prior to running these cookies on your website.
SAVE & ACCEPT
Call Now