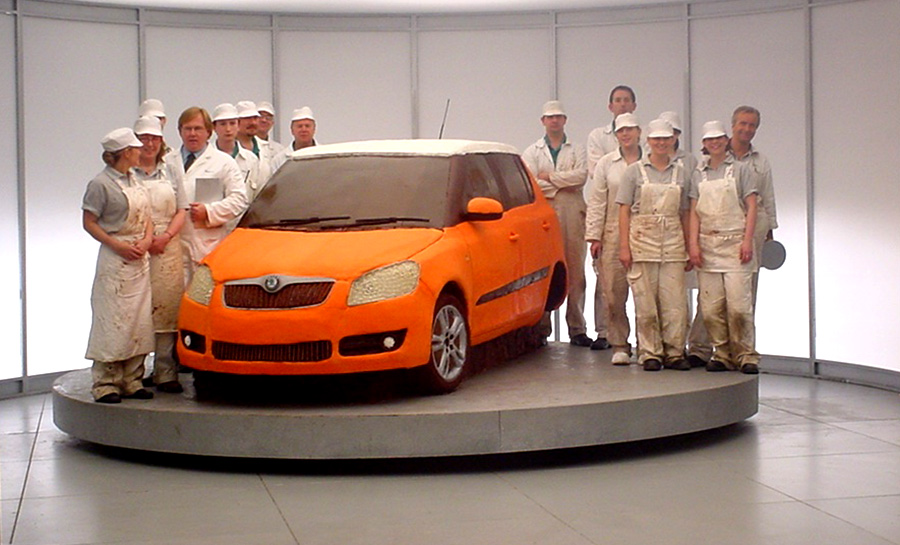 Through Pennicott Payne LTD May 2007

The Skoda Fabia “cake ad” was in a league of its own. Creating a full size replica Skoda car out of all edible baking ingredients, set to Julie Andrews ‘My Favourite Things.’

The strapline for the Fabia, was to be “full of lovely stuff”. The idea for a commercial based around building a car out of cake came from a conversation between creative directors John Allison and Chris Bovill whilst sharing cake on Valentine’s Day.

The on-screen crew consisted of six home economists led by Peta O’Brien and Sarah Tildersley, three sugar chefs, a machine operator, two prop experts, and four special effects modelmakers from Pennicott Payne Ltd one of which was creative fabrications founder Clare Grotefeld, with a large production team off-camera.
Filming was completed in Shepperton Studios over four days, with baking machinery rented from baking equipment company Brook Foods, though preliminary work such as casting moulds for the Rice Krispie panels was done three weeks beforehand in Pennicott Payne’s workshop in Clapham.
Production finished exactly on time, with the final touch the Skoda badge fitted at 2:30am. The marketing photo used for the whole ad campaign was shot at 3:00 am on the last day of the schedule.
The crew had planned to donate the remains of the cake to local charities and hospitals, but after four days under hot studio lights, it was no longer thought fit for human consumption, and was donated for composting to the East London community recycling project in Clapham.
A few pieces, such as the chocolate speedometer and marzipan wing mirrors were kept for posterity.

The 60 second commercial cost up to £500,000 to make involving the following ingredients.
180 eggs, 100kg of flour, 100kg of caster sugar.
Two bakers made 448 Madeira ‘brick cakes’ to form the foundation of the car’s chassis
Many cake bricks were layered with kilos of buttercream icing.
Large quantities of sweet chocolate sauce, 30kg of almonds and 65kg of dried fruit make the ‘crispy cake’ mix for the car’s bodywork.
The body work had been achieved by taking a mould of a real Skoda fabia car.
The crispy cake panels consisted of boxes and boxes of rice crispys, glacier cherries and chocolate to hold the body panels all together.
The paintwork was made up of sheets of fondant icing, coloured with 180kg of orange sugar paste, covering the moulded crispy cake panels.
A 300g tin of golden syrup is poured in place as the engine oil.
Liqurice laces where used to create the fanbelt, windscreen wipers and aerial.
The windows were made from fondant icing and 90kg of brown sugar paste
12.5kg of jam was piped onto Battenburg cakes, iced together to form the interior decor.
The radiators were made of 60 chocolate blocks, two front headlights made from hundreds of fox’s glacier mints glued together with egg whites, and meringues for fog lights. ‘After eights’ where used for the wing side lights.
Real jelly was used for the wobbly front head lights.
Finally the icing sugar Skoda logo was added as the finishing touch.

Click here for the full Daily Mail article on this project

Creative Fabrications would love to hear from you!
Give us a call to discuss your requirements or get a quote....

This website uses cookies to improve your experience while you navigate through the website. Out of these, the cookies that are categorized as necessary are stored on your browser as they are essential for the working of basic functionalities of the website. We also use third-party cookies that help us analyze and understand how you use this website. These cookies will be stored in your browser only with your consent. You also have the option to opt-out of these cookies. But opting out of some of these cookies may affect your browsing experience.
Necessary Always Enabled
Necessary cookies are absolutely essential for the website to function properly. This category only includes cookies that ensures basic functionalities and security features of the website. These cookies do not store any personal information.
Non-necessary
Any cookies that may not be particularly necessary for the website to function and is used specifically to collect user personal data via analytics, ads, other embedded contents are termed as non-necessary cookies. It is mandatory to procure user consent prior to running these cookies on your website.
SAVE & ACCEPT
Call Now